Croatian band Nellcote was formed in 2010. Their music traverses through alternative rock, indie, and blues. The current line-up includes its founding member and the main author, Vinko Ergotić (vocals and guitar), Lana Filipin (bass guitar, backing vocals), Igor Ivešić (guitar, keyboards) and Filip Barac (drums). Their first album, Disturbance in a Quiet Summer Night, was recorded by the band’s former line-up, which included Damir Trputec on drums and Lovro Boljat on guitar. It was recorded, mixed and co-produced by Luka Grubišić - Čabo (Soundbrick Studio), and mastered by Barry Gardner. The cover art was done by the talented Luisa Pascu.

While ‘running away from the past’ sound-wise, the band draws heavily on it thematically. Having exposed himself completely in an intimate semi-acoustic atmosphere on the acclaimed EP Surrender (2017), this time, with the help of a full band, Vinko Ergotić has recorded a louder, groovier, cheekier album, with more psychedelic elements. The author is now ready to face the past – he is confronting bad dreams, toxic relationships, and hostile environment, using the power and energy of the band to get everything out of himself and out of the way. 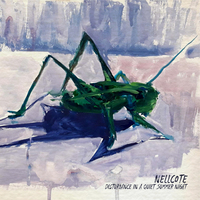 Disturbance in a Quiet Summer Night