Panda Rhei is a music project led by Ivan Kolar. What started as an intimate singer-songwriter outlet soon became a musically diverse project built patiently in and out of the studio. The goal of the project was to combine small and simple musical fragments with big electronic music production and more complex arrangements. The result of the process is a 10-song album that is energetic and dynamic, filled with narrative and sometimes unarticulated vocals, bright burning guitars, layered synths, and sturdy beats.

The album called 'Save Your Souls You Fucking Monsters' is a collaborative piece between Ivan Kolar and music producer Luka Dabro. The two jointly wrote all the tracks and put the album together piece by piece. The collaboration gave way to an authentic sound on the rock music spectrum by merging different and sometimes opposite principles to songwriting and production. Uncompromisingly, they had to compromise and exchange countless demos before settling on what we can hear now, otherwise the album would never be finished. What we have is an alternative but radiophonic rock record leaning on post-punk and indie while maintaining the wide electronic production throughout. 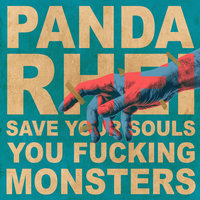 Save Your Souls You Fucking Monsters

PANDA RHEI
Save Your Souls You Fucking Monsters
€7.00